Iowa City Community School District officials stated in an email sent to families Tuesday that the Little Hawks received a police escort to the locker room, the bus and out of Fairfield following the incident.

The district’s email also stated that “during the game, an official directed a racially-charged comment toward our coach. The Iowa City Community School District never condones racism. We stand by our students and staff of color. We are also addressing an incident of physical aggression and helping our students learn better ways to handle a volatile situation.”

Your Prep Sports reached out to City High head basketball coach Brennan Swayzer via email on Tuesday. He declined further comment beyond the statement released by the district.

Monday night’s game officials were supplied by the Iowa City Athletic Officials Association (ICAOA). The group released a statement on the incident Tuesday.

“The officials involved categorically deny making any such statements. In fact, it’s completely out
of character for all of them, and they are shocked and hurt by the accusation”

The ICAOA, which has worked with the Iowa City Community School District (ICCSD) since 1970, expressed disappointment in the district releasing the charge before first contacting it.

“It’s concerning that the school district would put out a statement accusing the on-court officials
of making racially charged comments without first speaking to the officials or the association.
Accusations like this deserve to be fully investigated by the appropriate governing bodies and
we welcome such an investigation and our members will fully cooperate.”

Iowa Public Radio’s Zachary Oren Smith was first to report the incident after receiving the ICCSD’s email Tuesday. He received a statement from Dr. Laurie Noll, Superintendent of the Fairfield Community School District.

I just spoke with the Fairfield superintendent who offered the following statement. pic.twitter.com/OCT3xdpG14

The Fairfield Community School District released another statement on Wednesday:

In light of some of the publicity and inaccurate reports about the gym environment and police involvement at the Fairfield vs. Iowa City, City High Boys Varsity Basketball game on Monday, January 23, 2023, FCSD is compelled to provide clarification that demonstrates our community values and the happenings that lead to the end of the game.

FCSD is aware that Iowa City, City High School administration has contacted the Iowa High School Athletic Association regarding allegations surrounding the communication between game officials and the City High basketball coaches. FCSD is willing to provide any information that might be able to assist in an investigation.

Fairfield police were called at the end of the game to support the safety of all individuals. The police did not enter the building during this event. Fairfield Police stayed at the high school and were present when the City High team was boarding the bus, and an Iowa State Patrol trooper offered to follow the bus out of town and did so without incident. 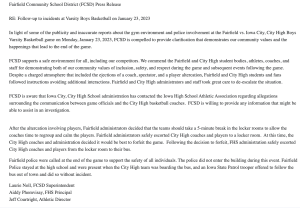 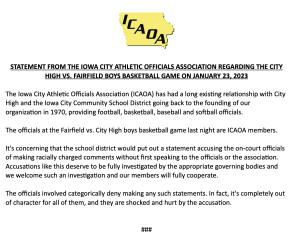 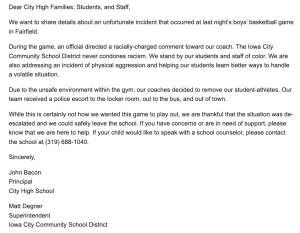 Athlete of the Week Home Page

Athlete of the Week Inner Page

Tweets by yourprepsports
What are we worth to you?
To help us continue supplying FREE content, please consider donating here